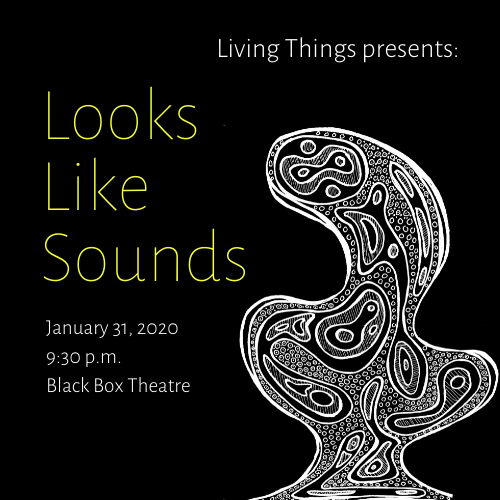 Looks Like Sounds is an experimental performance event that combines music, dance, and visual projection to explore live improvisation between multiple artistic forms.

Classical and avant-garde musicians and dancers will observe and respond to each other amid an ever-changing visual backdrop, connecting and communicating through the languages of movement, sound, and light. An instantiation of interdependence and flux, this performance will bring artists together in a collaborative spirit of artistic innovation, audacious imagination, and trust.

Looks Like Sounds will take place at the Black Box Theatre (Kelowna Community Theatre) on Friday, January 31, 2020. Doors open at 9:30PM after Cuckoo at the RCA.  Join us as we celebrate the creative impulse.

Andrew Stauffer is a percussionist and sound artist from Taylor, Texas, whose musical projects have ranged from drumming in jazz fusion bands to creating percussive soundscapes for multimedia art performances. Understanding the arts as an avenue for community connection has shaped many of his projects, which have included creating intimate site-specific performances with Boston-based interdisciplinary group, Vision Lab, leading transitional community drum circles, and supporting teens as a rock band instructor. Andrew holds an M.Div. from Harvard Divinity School, where his research focused on the intersection of philosophy of music and religion.

Nicholas Denton Protsack is an emerging Canadian composer and concert cellist, originally from Kelowna, BC.  He recently completed a master’s degree in both disciplines at the San Francisco Conservatory of Music. His creative work often explores the ways in which nature and music intersect.

Darren Williams has been participating in improvised/ experimental music both as a performer and concert presenter since 1998.   As a musician, Williams is a saxophonist and bassoonist who pushes the limits of improvisation and extended instrumental technique into regions that are lyrical, terrifying, uncanny, and “more fun than spiked punch live” (Georgia Straight). Called “a raw, vocal explorer,” (Stuart Broomer, Musicworks, Downbeat).  Williams has worked with many world renowned musicians including Eugene Chadbourne, Chad van Gaalen, Han Bennink, performed at the Vancouver International Jazz Festival and the Casse-Tête Festival of Experimental Music, and co-founded and directed the Skin and Bones Music Series.

From tippin’ cows in Texas, to living with the Berbers of the High Atlas Mountains in Morocco, singer/songwriter and homeschooling mother Leila Neverland’s life journey lends to her captivating storytelling, rich songwriting, and unique performances. Silence is the canvas she paints with sound, and her tremendous voice can shake folk to the core. Find more at www.leilaneverland.com.

Nils Loewen is a folk / experimental cellist residing in Kelowna, BC. After studying classical guitar and receiving a B.A. Major in Music from the Canadian Mennonite University in Winnipeg, he picked up the cello to learn around the campfire while treeplanting in northern BC. Deeply inspired by the quote from Louis Armstrong: “All music is folk music – I ain’t never heard a horse sing a song!”, Nils aims to understand music as the universal language and to find a connection between himself, the audience, and the aether.

Neil Cadger is a performer, director and teacher who graduated from l’école Jacques Lecoq in Paris, France in 1984. He founded Wissel Theatre in Gent, Belgium in 1984 and created theatre performances which toured extensively in Europe. He co-founded Inner Fish Performance Company with Denise Kenney in 2011 to provide an infrastructure for producing and touring devised performances. In 2017 he founded the Living Things International Arts Festival which presents local, regional, national and international performances.

Emerald Holt is an emerging media artist and classically trained pianist completing her Master of Fine Arts (MFA) degree in Visual Music at the University of British Columbia, Okanagan (UBC-O). She received her Bachelor of Fine Arts Degree from UBC-O in 2018 and was awarded the Dean’s Entrance Scholarship Award for her first year of MFA studies in 2018. In her second year she received a University Graduate Fellowship, a Social Sciences and Humanities Research Council scholarship, and a Michael Smith Fund for Foreign Study Supplement to study in Bath, England. In 2019 she presented her thesis research at the Interactive Arts, Science and Technology Regional Conference (IAST) at the Kelowna Public Art Gallery, the Humanities Graduate Conference (UBC-O), and the Humanities Graduate Conference (SFU-Vancouver).